After partition, Muslim banking shifted from Bombay to Karachi, the first capital of Pakistan. For instance, the largest jute processing factory in the world, at Narayanganj, an industrial suburb of Dhaka, was owned by the Adamjee family from West Pakistan. Because banking and financing were generally controlled by West Pakistanis, discriminatory practices often resulted.
This preference became more pronounced after explosive labor clashes between the Biharis and Bengalis at the Narayanganj jute mill in 1954. Added to this, Pakistan had a severe shortage of trained administrative personnel, as most members of the pre-independence Indian Civil Service were Hindus or Sikhs who opted to belong to India at partition. The Muslim Bengalis in East Pakistan did not have any past administrative experience. As a result, high-level posts in Dhaka, including that of governor general, were usually filled by West Pakistanis or by refugees from India who had adopted Pakistani citizenship. 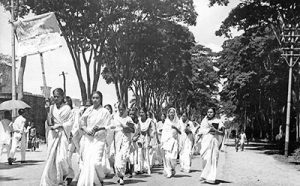 In 1948, Mohammad Ali Jinnah declared in Dhaka, capital of East Pakistan, that Urdu spoken in the West by Muhajirs and in the East by Biharis, would be the sole official language for all of Pakistan. But in reality, Bangla was spoken by the majority of people in East Pakistan. Several students in East Pakistan revolted lost their lives on February 21, 1952. The day is known as the Language Martyrs’ Day. UNESCO declared February 21 as International Mother Language Day. The Bengalis of East Pakistan constituted a majority (an estimated 54%) of Pakistan’s entire population. At the same time speakers of the languages of West Pakistan (Punjabi, Sindhi, Pushtu and Baluchi) were also upset that their languages were given second-class status.

Even after Sheikh Mujibur Rahman’s victory in 1970 elections in East Pakistan, Zulfikar Ali Bhutto and Yahya Khan opposed Mujib’s idea of a separate government for East Pakistan. Representation in the National Assembly was discouraged. A civil disobedience movement started in East Pakistan as Mujib called for a strike until the governmental powers were given to the people’s representatives. The six point program of Awami League demanded political freedom and the government be of political and parliamentary nature and an East Pakistani provincial autonomy. This was in direct conflict with the interests of Pakistan’s President Ayub Khan for greater national integration which in reality was establishment of West Pakistani interests. Yahya Khan postponed the convening of National Assembly and also named General Tikka Khan, East Pakistan’s military governor who would lead the genocide that was about to come.