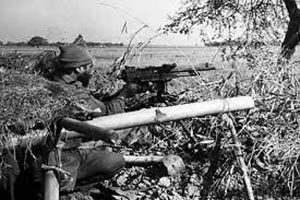 It was the Indo Pak War of 1971. Unleashing all its arsenal and dreaded armored divisions  West Pakistani military fortified East Pakistan against any Indian intervention while skirmishes kept on growing in the North West frontier along the Indo-Pak border.  Determined and with an aim to annihilate the enemy and liberate Bengalis in East Pakistan who believed in the birth of Bangladesh, the Indian Army and Indian administration initiated operations after operations that would eventually lead to the liberation of Bangladesh.  iLEAD’s 1971 India’s Finest Hour testifies this history through original footages and magic of its narrative.

Pakistan was to be resisted and assaulted from land, air and sea. The fall of Pakistan occupied Dhaka and the resurgence of a new country was a dream being materialized drastically.

Indians were not experts in riverine warfare. They waited till December, 1971. The air raid on Indian soil via Operation Chengiz Khan was the final stir to the nation and thus a battle which was confined inside East Pakistan turned into a full scale war between India and Pakistan.  Supported by superpowers like US and China, Pakistan deployed nine infantry divisions, an Army Reserve North and an Army Reserve South, which comprised Armoured Divisions on the western front.

The film 1971 India’s Finest Hour shows how the events unfold, it gets the audience glued to their seats as they watch glimpses from the war and how India took initiatives to free Bangladesh from the Pakistani yoke.

Fate had different things in store for Pakistani forces. Little did the world or Pakistan knew about the might of the Indian Army and the leadership strategies of Indira Gandhi.

Deeper into the film 1971 India’s Finest Hour we witness how:

The Indian Air Force had clear objectives and conducted sorties after sorties to:

Meanwhile the Indian Navy saw West Pakistan’s headquarters Karachi as the prime target and shattered the Pakistani confidence by destroying most of their fuel reserves by attacking Karachi Port from the sea. The port burned for 7 days.

On screen we see the horrors before the war but the war clouds that loomed throughout India’s borders were nothing less frightening. Apprehension will fill your senses as you see –

With a collateral and well spread operation plan the Arabian Sea was quarantined into a battle zone, India into a no fly zone for all Pakistani Aircrafts and Bay of Bengal as the strategic arena for world powers like Russia and UK, at loggerheads with each other, showing off their maritime might.  As we said earlier – hell broke loose. Engagements at sea included submarines, tiny missile boats, naval blockades and safe passage to merchant ships to name a few.

With multiple operations on ground, gory battles continued between Indian army and the Pakistani slaughter machines at multiple zones on the East and West.  Some of the momentous battles were – Battle of Boyra and Bogra, Battle of Chhamb, Battle of Hilli, Battle of Poonch, Battle of Longewala, Battle of Basantar, The Tangail Drop, The Sylhet Crossing and many more.

Total number of Indian ground forces before war was 833,835 and for Pakistan it was 3, 65000.  Pakistan was supported by US, UAE, France, China while India was supported by Israel and Russia. Public opinion all around the world supported the Indian intervention in East Pakistan.The Concert for Bangladesh in New York, articles like The Blood Telegram and Genocide in the world media testifies the same. India never decided to suddenly attack Pakistan, the war had multiple causes:

The Indian airforce, navy and military contributed to the growth of the MuktiBahini, the guerilla resistance army in East Pakistan. Not only with support of base camps, helicopters and ammunition did the Indian Army work with MuktiBahini, the cover and support the Indian BSF provided to MuktiBahini and all its squadrons and multiple groups spread along the Bangladesh border, helped them become successful. The martyrs from MuktiBahini did not die in vain.

After 13 days of rigorous warfare on various zones, the tactical operations and strategies and the drastic advances by the Indian army, West Pakistan decided to lay down their weapons. 93,000 Pakistani soldiers from their most dreaded armoured divisions with provisions to fight for six months surrendered on December 16, 1971 in full public view of the world. 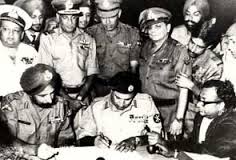 What the Pakistani Generals conspired against India in their plans to subjugate Bangladesh, could not be achieved. Dhaka was captured.  The surrender was signed.

The Indian military operation of 1971 has been described as a “lightning campaign” and is studied in military institutions across the world. The National Defence College of Pakistan in a document on the 1971 war wrote.

“The Indians planned and executed their offensive against East Pakistan in a textbook manner. It was a classic example of through planning, minute coordination and bold execution.”

All wings of the Armed Forces, the Border Security Force, the Defence Ministry, External Affairs Ministry, Home Ministry, Finance Ministry, Railways and RAW (Research and Analysis Wing) worked together like a well-oiled machine and surprised the world with what could be achieved in just 13 days – a history that truly gave birth to Mujibur Rahman’s dream, Bangladesh…

India throughout History has been invaded. In most cases, India could not resist these invasions from all around the world. The grand eclectic civilization and culture of India proves that India has welcomed new cultures too. But this was a different matter altogether.  The need to document a war, often overlooked and not taught in schools was overwhelming as India protected a country pushed to the brink of existence and restored its own dignity as well, with all its might. Still envied by its foes who are constantly trying to subjugate India with all forms of attacks, India has been able to stand tall in the face of a critical time, thanks to glorious victories like the one of 1971, an hour we consider as India’s finest. 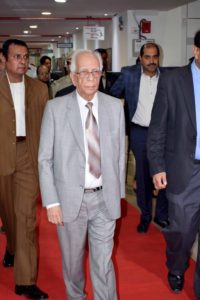 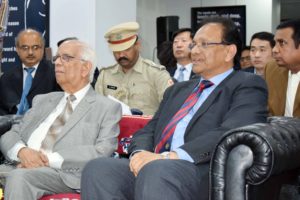 While most of us are familiar with “Bangladesh Liberation War”, it’s a tragedy that we have no inkling about the relevance it holds, even to this day. The great courage of the Indian troops and how they resisted and crushed West Pakistan’s domination of East Pakistan (now Bangladesh) and made them surrender will forever stay etched in the pages of history.

The conflict went on for more than eight months. And finally on December 16, 1971, a new nation, Bangladesh was born.

Indian Prime Minister Indira Gandhi of the time helped Bangabondhu Sheikh Mujibur Rahman (aka Mujib) to achieve his ultimate goal and safe guarded India’s borders. With this, India achieved its biggest military and political victory. Indian government and the people of India extended their help and stood by the people of Bangladesh.

By the end of April, 1971, violence and genocide in East Pakistan had driven nearly ten-million refugees into India resulting in failure of national economy rapidly. There were indications that millions of others civilians were ready to cross over. Despite India’s own difficulties, India arranged refugee camps for them and provided food and shelter. But Pakistani Militia and their leader Yayah Khan had denied the fact that those refuges were infiltrating from East Pakistan.

Meanwhile in East Pakistan, local population were up in arms against the Pak-administration and were brutally subjugated by the Pakistani army. Indian Prime Minister Indira Gandhi was aware that the situation was going in a direction when India might have to intervene more forcefully and tactically.

It all started with the Operation Searchlight, a planned military operation carried out by the Pakistan Army under the guidance of General Tikka Khan that started on March 25, 1971. He arrived to curb the Bengali nationalist movement by taking control of the major cities, and eliminating all operations, political or military, within one month. The same night Mujibur Rahman was arrested and sent off to a secret location. Pakistani Army began a large scale of brutal crackdowns, targeting the Awami League leaders and Bengali intelligentsia.

India started to provide political, diplomatic and moral support to the Mukti Bahini (guerrilla resistance movement formed by the Bangladeshi rebels). Indira Gandhi told General Sam Manekshaw to prepare for the war. General Sam Manekshaw borrowed a few months time from Mrs. Gandhi and prepared his force for the war. It was under Sam Manakshaw’s command that the Indian forces conducted victorious campaigns against Pakistan in the Indo-Pak War of 1971 which led to the liberation of Bangladesh in December 1971.

On December 16, 1971 at around 4.30 P.M. (IST) Amir Abdullah Khan Niazi Lieutenant General and in-charge of Eastern contingent of Pakistan attached his signature to a one-page document accepting pakistan’s surrender. One-minute later, Lieutenant General Jagjit Singh Aurora, Commander-in-Chief Indian forces in Bangladesh accepted the surrender with a stroke of his pen. Around 1500 kilometres away in Delhi, Indian Prime Minister Indira Gandhi announced in the Parliament:

“Dhaka is now the free capital of a free country.”