From time of Indian independence, till 1971, East Pakistan faced terrible oppression by the Dominion of West Pakistan. 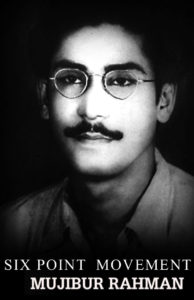 This was at three levels – Linguistic, Financial and Political. But a time of reckoning came, when a power rose to champion the cause of East Pakistan’s liberation – a power known as Awami League. It did not matter to leader Sheikh Mujibur Rahman and the pioneers of Awami League how their victory and right for an independent government was being denied. Their strength and power also stirred and spearheaded the student community and integrated them for a major resistance against the regime of West Pakistan.

At the core of the Awami League was an agenda, The Six Point Movement also known as the Six Point Program which were mainly six demands put forward by coalition of Bengali nationalist parties in 1966 – to end the West Pakistani exploitations at various levels.

These are the Six Point Programs: (Courtesy – en.wikipedia.org/wiki/Six_point_movement)

West Pakistani officials believed that Hindus in East Pakistan and specially the Bengalis were not marital enough to fight unlike the Urdu speaking Punjabi Muslims and Pashtuns. Moreover the carnage that followed during the year of genocide was also backed up by the notions of racial superiority. 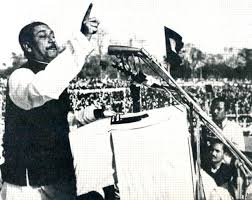 “…Sheikh Mujibur Rahman planned to announce the Six Points at a conference of opposition political parties in Lahore in early February 1966. He was not permitted to do so by the other participants, including the chief of the Awami League at the time, Nawabzada Nasrullah Khan. They found the plan too incendiary to be articulated.” www.albd.org

An added factor and a precursor to the Six Point Program was the Language Movement where Bengalis and specially the Bengali student community demanded the right to use their mother tongue “Bangla” and many became martyrs for that cause. Nowhere else in the world did anyone died for the cause of language. World Language Day is celebrated in the memory of these martyrs.

The roots of the 1971 war go deep into factors like the Six Point Program and the Language Movement as well.

1971 India’s Finest Hour also shows how this denial of benefits culminated in the lack of help during the Bhola Cyclone.

After everything that East Pakistan went through, “The Six Point Program” was perhaps the most politically ideal and civic way for the Awami League to present their demands but then again West Pakistan invited their ultimate defeat through all the wrong moves. Had they accepted the program or at least not initiated the carnage that followed in 1971, Indian intervention would not have been required, the war wouldn’t have started.