Prime Minister Indira Gandhi decided that it was economical and humanitarian to intervene in the Bangladesh Liberation War instead of taking in millions of refugees. Exiled East Pakistani army officers and Indian Intelligence starting building the Mukti Bahini. In April 1971 Indian Army Chief Sam Manekshaw was asked by the PM to go into the war but there were difficulties: 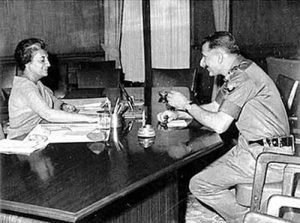 A victory could be guaranteed if the terms were were met and the fixed date of official attack in December were accepted. This was approved and the meeting between Sam Manekshaw and Indira Gandhi garnered public support for the war. By November thousands of people led by West Pakistani politicians supported the movement to “Crush India.” Meanwhile Indian military started the build up of forces on the borders and waited till December for drier grounds.

The immediate mobilisation of troops to launch a full scale invasion was ordered by Indira Gandhi.

This was to be a coordination of Air, Land and Sea Assault.

The Objective of the Eastern Front – Capture Dhaka

The Objective on the Western Front – Prevent West Pakistan from entering India. There was no major offensive into the West Pakistani territory.

East Pakistan was to be attacked by land from three directions and blockade by sea in the fourth direction. The civil administration ensured all supplies and provisions. Pakistan had marginally superior armour and artillery elements than India.