The campaign to liberate the people of East Pakistan from the West Pakistani yoke was a memorable one.  The 1971 war operation freed the people of Bangladesh from three types of oppression: Linguistic, Political and Economic. 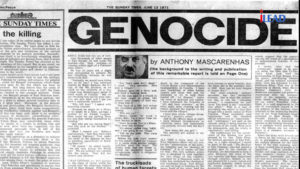 The genocide initiated by West Pakistan was a culmination point of that oppression which led to a rebellion of a massive scale. The student movements and the popular demands favored the victory of Awami League. The desperate moves by the Pakistani government to delay a political negotiation and the subsequent killings of Bengalis and people in favour of an independent identity led to the migration of a large scale into India.

India at the time was at the 24th year of its independence and any sort of economic pressure would only hinder the growth of the country. Prime Minister Indira Gandhi always proposed the fact that India is a peace loving nation but when it comes to issues of national security, India will have to take all necessary measures.

In December 1971 the countdown to Bangladesh liberation began with a 13 day war between India and Pakistan.India had no option but to intervene in Bangladesh’s liberation with all its might and coordinated assault from Land, Air and Sea. Momentous battles like Battle of Basantar, Battle of Gazipur, Battle of Hilli, Battle of Boyra, Battle of Longewala broke out at both the Eastern and Western theatres of the Indian borders with Pakistan.

Pakistan with all its strategies did not emancipate the fall of Dhaka and the subsequent surrender of the Pakistani forces. On December 16, 93,000 fully armed Pakistani soldiers from their most dreaded divisions surrendered to Indian forces in full public view of the world.

The recognition of Bangladesh as an independent country was a long awaited dream for both Bangladeshis and Indians.